Working together in wild weather

Firefighters from Fire Rescue Victoria (FRV) have teamed up with volunteers from the Victoria State Emergency Service (VICSES) and CFA to help the community after wild weather struck the state on Thursday night.

On Thursday 27 August, Victorians experienced a significant weather event with rain and wind gusts of around 100km/h, which resulted in damage to a number of homes and other structures.

FRV received more than 550 calls between 5pm on Thursday and 9am on Friday, and a number of FRV specialist Urban Search and Rescue (USAR) firefighters and High Angle Rescue Technicians (HART) were dispatched to assist.

FRV Rapid Impact Assessment Teams were called to one of the worst hit areas in Belgrave on Friday morning to support VICSES and CFA crews at Kaola Street, where around 20 houses were damaged by high winds and a number of fallen trees and power lines posed a risk to the community.

Using FRV’s Remote Piloted Aircraft Systems (RPAS) technology to scour the area, firefighters have been able to provide an aerial overview of the street and identify any damage, making the operation much safer and faster for emergency service crews.

FRV Deputy Commissioner Brendan Angwin said that FRV was pleased to be able to provide this aerial intelligence and impact assessment teams to support VICSES in response to this incident.

FRV uses the cutting-edge technology at a wide variety of events from bush fires to floods and police incidents.

“FRV firefighters have done a fantastic job supporting our colleagues at VICSES.

All agencies work together as one during any emergency response, but especially following significant storms and weather events.

Having our RPAS units on scene increases safety for firefighters and other emergency responders conducting impact assessments, because we can see what hazards and situations our crews may be exposed to in advance.

As a recognised leader in the field, FRV is often called upon to provide expertise and assistance to our sector partners and government on this technology.” 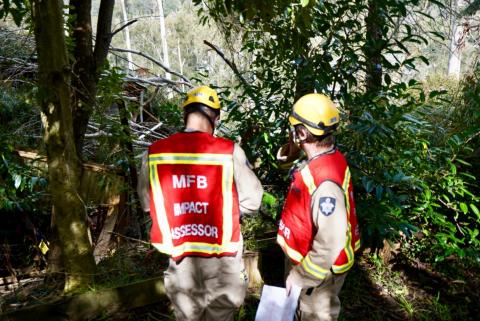